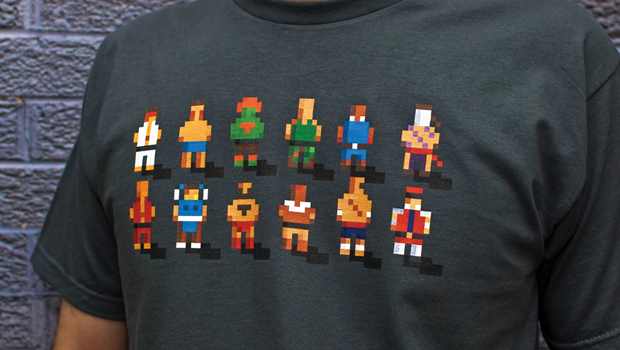 Computer games or video games had been famous for a long time now. Video games create an interaction between humans and a user interface on a video device. Recalling childhood, there had been so many video games like Super Mario, Battle Tank, Contra, Pac Man, Street Fighter and others. They said that if you experienced playing all of these when you were a kid, your childhood rocks! Oh, well, up to this day, these games still exist and were even remade into better versions. But their pixels version are still loved by many especially by game fans.

That is why you can still pixel gaming characters on t-shirt prints since these are still patronized by game lovers. So, today, we will be giving you a collection of t-shirt designs that features video game characters in pixels. You’ll see the famous Super Mario and many others. Scroll down and prepare to get a pixilated of your fave games now and then. Here we go:

Game heroes are here! Choose which one is your favorite character. But you’ll actually get all of them from this t-shirt.
Designer: PixelBlock

Mario’s loyal friend, the mushroom gives makes him bigger in the computer game. But this shirt is for game addicts who could have spent much time playing and was given an advice to “get a life”.
Designer: bomdesignz

Yoshi is the friend & pet of Mario- one of the most famous computer games ever.
Designer: tombst0ne

The famous Pacman stars in this shirt made in a pixel version.
Designer: R-evolution GFX

From the classic family computer, a Classic Survivor Game. Not sure if these still exist today but they do exist on this shirt!
Designer: Fanboy30

If you love the Street Doctor Console Game, this t-shirt is for you.
Designer: DREWWISE 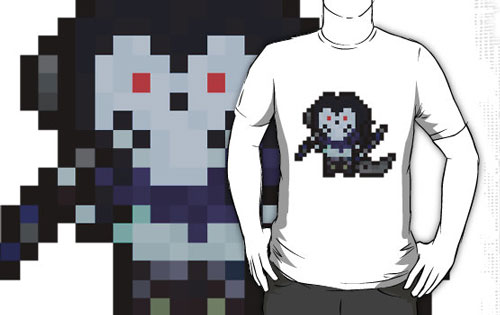 “Death” from “Darksiders II” is the sole print of this t-shirt. So, if you like this character, this shirt is right for you.
Designer: Pixel-League

Super Mario is a sure legend when it comes to gaming characters. He really was pixilated in family computers.
Designer: surfking

Portal is another game wherein one enters different portals all throughout the game.
Designer: Baznet

Mario’s gonna save the princess and would beat the Dragon that took hold of her.
Designer: bomdesignz

This is Master Chief Petty Officer John-117 of HALO. Get this print and be as witty as this character.
Designer: Michael Myers

Pacman with his breakfast inside him. Yum yum!
Designer: Lee Byway

Street Fighters is one of the most loved computer game up to this day. They sure looked a bit different in pixels.
Designer: SplitReason gear

A game fan shirt for the Prince of Persia. Lovers of this game will surely become lovers of this t-shirt!
Designer: hangman3d

Feels like playing the actual game in this print of the Alien’s Survival Console Game.
Designer: nowherebad

Couple game shirt with Mario & the Princess who is always kidnapped by the dragon.
Designer: Alexander Sliwinski

If you had fun playing with computer games even when they were still on pixels, you will surely like this collection. Although, computer games these days already have a great deal of details on them due to technology, games like the ones above are still alive and patronized by game lovers. We hope you liked these geeky gaming t-shirts we have collated for you.