Who would not be familiar with one of the most famous video games ever? Super Mario Bros. have been here

If there is one thing that will never go stale and will always be with the trends, that is music.

The Earth is the most beautiful planet in the universe. We love our planet because this is our home. Aside

Social media is the trend these days. As a matter of fact, you would constantly see updates from friends and

If you are that person who is not fond of dressing up or in wearing costumes, then you can still 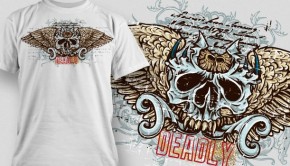 Wings are favorite design elements for grunge and gothic designers. For them, it could both symbolize the light and the

Who says Math is limited in the four corners of the classroom? Who says only engineers can deal with them?

Feel the beat of music while wearing a t-shirt with a headphone print. It is like extending your love for

Doodles. These are drawings done without the need of really making things totally perfect. It is giving your hands and